Wetblast machines are not all created equal

A common misconception is that all wetblast machines are the same, give the same finish and operate the same way. In fact, there are several methods of getting air, water and media to the process gun. Another complication is that the open systems such as those used for graffiti removal and on boats use similar terms but mean entirely different processes such as the use of high-pressure water which the Dana-Ridge process does not use.

The Dana-Ridge wet-blasting process offers many advantages over both the regular dry sandblasting method AND the hobbyist wetblast machines out there.

They’re  environmentally friendly and less hazardous to user health with its dustless operation. Also, there’s no need for an expensive filtration system. You can blast with finer or coarser media than a dry blaster and blast items that would get destroyed in a regular sandblaster.

Being heavy duty commercial grade machines means they can provide a greater volume of media to the gun at a greater flow-rate This increases both the efficiency and the range that these machines are capable of. Very important considerations when time is money for your operation.

Its one-step cleaning and blasting process it eliminates the need for component pre-cleaning and degreasing and you don’t have to worry about leaving fingerprints behind when you touch the brilliantly finished part.

You’ll see terms such as “wet-blaster, vapour honer, vapour blaster, vapour matting, slurry blasting” and more. This can cause some confusion and leaves some new wet-blast cabinet owners wondering why they can’t get the same finish as the contract blaster they used to take their parts to (who was likely using the Dana-Ridge wetblast process). Not only that, there are machines on the market that are geared towards to home hobbyist. These machines are commercial grade and mean less time processing.

The venturi system is also common on a lot of dry sandblast cabinets and processes but is not very good for a wet setup.

It uses a principle where air or fluid is passed through a constrictor increasing its velocity and creates negative pressure. This allows a second fluid to be drawn into the flow. 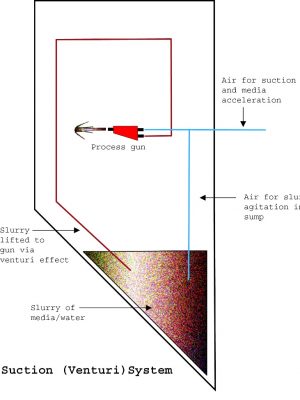 A second system (also popular in dry-blast cabinets) is the pressure pot system. Here the slurry is directed to a pressurised “pot” using a small pump and the air pressure inside the pot provides the force that sends the media to the process gun where it is further accelerated using compressed air. 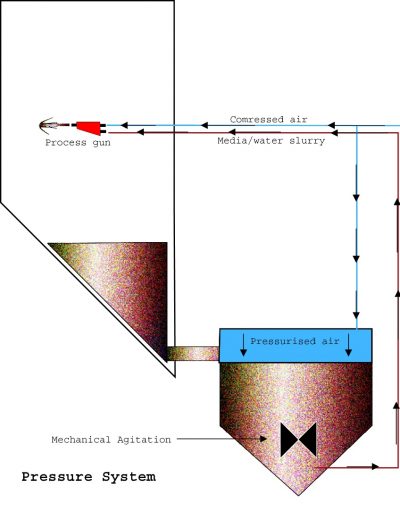 Vapour blasters use a pump that both stirs and sends the media slurry to the process gun. The motor is outside the unit while the pump is inside the sump and samples the agitated slurry. Note: Some of the non-industrial machines have a small submersible slurry pump located in the sump but are not in the same league as the commercial units. 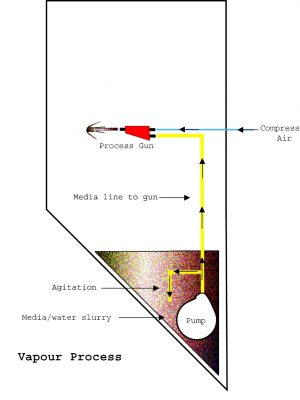 Using the method of pumping from a common collection point at the bottom of the sump they are able to maintain a consistent flow to the gun. Some of the flow is also redirected down into the sump to agitate and stir the slurry meaning better concentration.

An air-jet inside the process gun provides the acceleration to provide a superior finish. 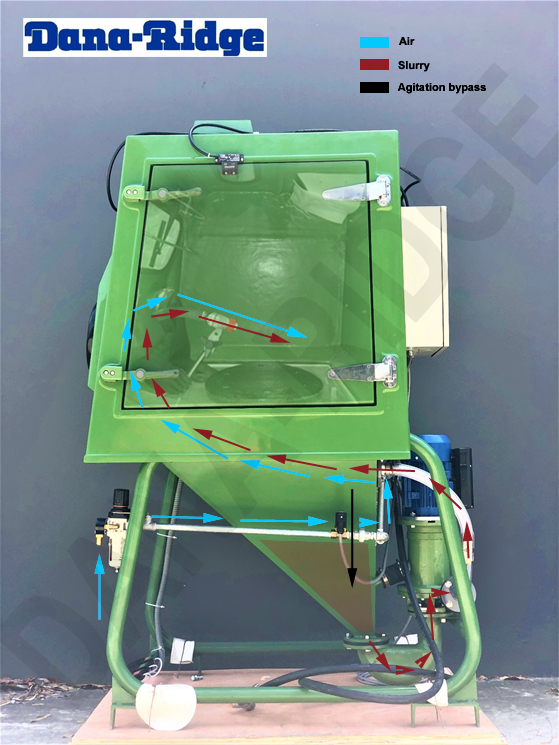